The following post is an abstract for my presentation at the 2013 Byzantine Studies Conference held at Yale University from October 31-November 3. For a complete schedule and compilation of abstracts, see the conference program. 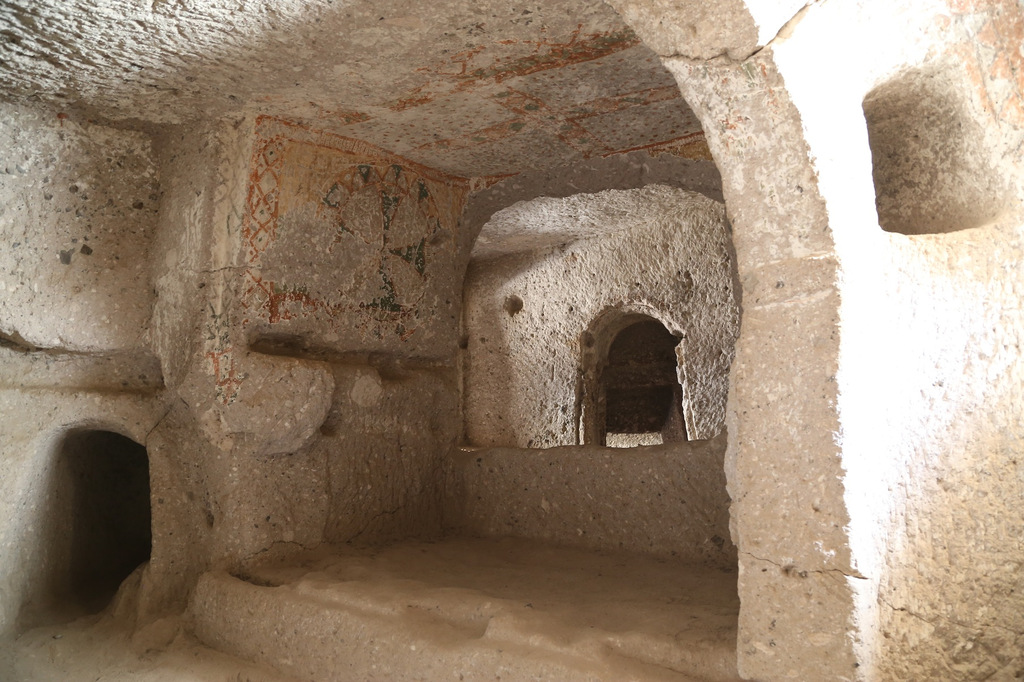 An unusual tomb in Karabaş Kilise, a church in the Soğanlı valley.

Commemoration in Cappadocia: A Reexamination of the Tomb Chamber in Karabaş Kilise

A tomb chamber hewn between two chapels in Karabaş Kilise raises questions about preparation for death and the nature of monastic commemoration in Cappadocia. The Karabaş complex is an irregular courtyard arrangement in the Soğanlı valley. Its main church is dated to c. 1061 based on a donor inscription, but the original decoration is probably from the early tenth century, and the remaining four chapels, including the tomb chamber, were dug after that. The church contains a number of burials, including below-ground and arcosolia types, but the tomb chamber is unique among them. A painted cross on the flat ceiling sanctifies the tomb space from above. A shaft accessed through a small window connects the tomb to the apse of the adjoining chapel to the southeast. This paper asserts that a reexamination of the chamber, particularly the window, is needed in order to more fully incorporate this space into our understanding of commemoration in Middle Byzantine Cappadocia.

Guillaume de Jerphanion documented the space in a more complete state, indicating a northeast wall with a small window (no longer extant), demonstrating that the tomb was originally connected to other chapels only by windows. Lyn Rodley recorded paintings and inscriptions before the northeast wall’s partial destruction in the1980s. Four monks, three of whom are commemorated with inscriptions giving the month and day of their death, are painted on the tomb chamber walls. The fourth is depicted in a bishop’s omophorion; his inscription explains that he worked here and died, but it is incomplete and gives no month or day. This could mean that he was the last of the group to die, or that the tomb’s use had ended by the time of his death. Rodley surmises that the windows may reflect the cavity’s previous role as a dwelling space, citing the more probable use of windows by the living (Cave Monasteries 2010). However Robert Ousterhout notes that it bears resemblance to a similar tomb in nearby Kubbeli Kilise and was likely for the burial of an important person (“Remembering the Dead” 2009).

Recent scholarship on multi-sensory worship and commemorative portraiture provides new contexts in which to study the tomb and its donor portraits. While the ceiling cross may have served as a devotional image for the monks in life, I argue that the sanctified burial space was kept active by sounds of commemoration in the memorial space. These activities may have included concelebration of the liturgy or relic collection after the monks’ death. In nearby Zelve, Saint Symeon’s cone (early 10th century) has a comparable ceiling cross and burials in its ground-floor chapel. Its personal/residential areas are dug from the opposite side of the cone and level off into another chapel and an upper dwelling. The excavation and decoration of these personalized chapels would be preparation for eternity, seeming to provide a haven for both the living and the dead.