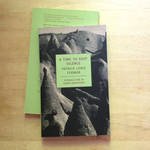 In a time of amateur archaeology and European Grand Tours, nineteenth- and early twentieth-century adventurers such as Father Guillaume de Jerphanion and Gertrude Bell felt a compulsion to explore and document Cappadocian monuments. Another celebrated travel writer and adventurer, Patrick Leigh Fermor, made a trip to Cappadocia much later, some time around 1950, I believe, but his description gives us an impression of how the rugged landscape and its Christian past were regarded by Western travelers after World War II. In A Time to Keep Silence, he calls the area “remote and dateless,” citing buffalo-carts and camels, and an extinct volcano [79]. Years after the trip, he recalled that the “ghostly monastic world of Cappadocia, too, remains as illuminating (and as irrelevant) as it appeared under the hot Anatolian sun,” [89].

His description of the settlements, at the time still thought to be exclusively monastic, comes at the end of a book in which he describes living and writing in European monasteries. In these places, he learned to thrive in their silence and peacefulness, away from the bustle of modern life. While his romanticized view of the cave dwellings ignores their enduring historical legacy and their importance to Byzantine studies, I have also written about the peacefulness that comes from overlooking ancient volcanic valleys through rock-cut rooms.