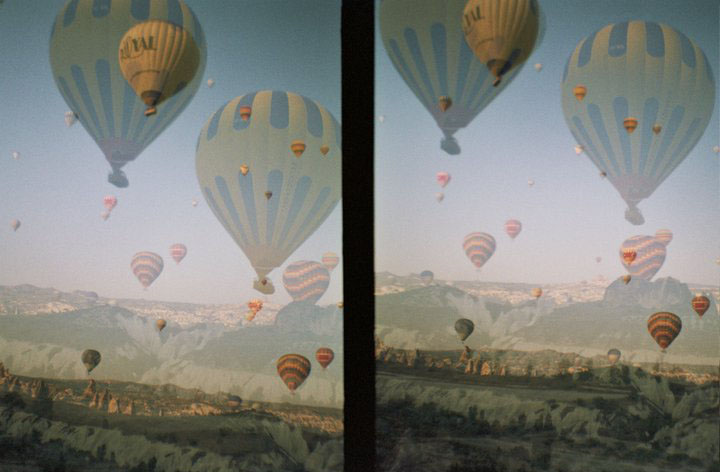 Balloons above Cappadocia at sunrise. (Photo taken as a double exposure with a Diana Mini analog camera).

Every good tourist knows that a hot-air balloon ride is a splendid way to view Cappadocia at a glance. In the video clip below, Professor Robert Ousterhout says during his first balloon ride that it feels as though he has “looked at Cappadocia from both sides now.” Certainly, the contrast between floating above the valleys and crawling inside the rock-cut architecture within the landscape is dramatic.

The video below is of Martha Stewart, accompanied by Professor Ousterhout, surveying the Rose Valley, a Byzantine settlement called Çavuşin, the volcanic cones of Paşabağ, and the geographic changes in the region that are visible from above. (Incidentally, I rode in a balloon with the same pilot last year). The clip aired on the Hallmark Channel in October 2010, and the link here is courtesy of Royal Balloon.

*Documenting Cappadocia does not endorse any particular balloon company. Hotels, guidebooks, and travel websites offer information for booking balloon rides. For instance, the Captivating Cappadocia blog has offered a series of posts on the topic.