The New York City Digital Humanities group (NYCDH) has granted Second Prize to my project, “Reconstructing a Sacred Barrier: Digitally Recreating a Byzantine Chapel” for its 2015 Graduate Student Digital Project Award. I’m thrilled and grateful, particularly after an encouraging and fun meeting with the other recipients and NYCDH mentors this week. I look forward to combining my own photographic data with historical photos and descriptions for a better understanding of a Byzantine monument. The post below is an excerpt from my application. 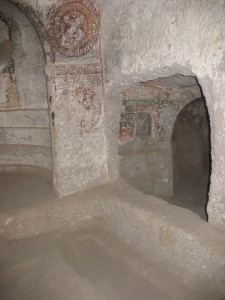 A damaged wall that once separated a chapel from a painted tomb chamber in Karabaş Church.

Project description
A tomb chamber carved alongside a chapel in a rock-cut monument called Karabaş Church (c. 9th cent) raises questions about preparation for death and the nature of commemoration in the often-neglected province of Byzantine Cappadocia. A painted cross on the flat ceiling sanctifies the tomb space from above, but scholars do not know exactly how the decoration was related to the chapel or why the tomb would have been decorated on the inside. The wall dividing the two spaces was almost completely destroyed by vandalism in the 1980s. However, a photo published in the early twentieth century reveals that the dividing wall was a sacred barrier offering visual access to the holy dead through a small window opening from the chapel into the tomb space.

Art historians have yet to decipher why visitors had access to the tomb—could worshipers actually see or touch a sarcophagus? Was the tomb’s ceiling decoration a devotional image for viewers in the chapel or was it obscured by the wall?—but a 3D model of the area can determine what was visible from the window and how the spaces were used in conjunction with one another. This space has the potential to help us deepen understanding of the relationship that Byzantine Christians had with the holy dead, whose remains were sacred relics and who were thought to act as heavenly intercessors on behalf of the living.

With virtually no surviving primary source texts or objects from medieval Cappadocia, archaeological and visual evidence in the monuments themselves is our crucial link to the past. When that evidence has been damaged, as the Karabaş tomb was, scholars are left with an even deeper lacuna of evidence. However, I argue that more frequent use of digital tools can help regain some of that lost evidence by using historical photographs to supplement current research and produce more reliable visual data.[1]

With its painted walls and ceiling, the Karabaş chapel and tomb are art historically significant. They are also an excellent example for digital humanities experimentation because there are a precious few historical photographs that can be combined with the surviving material to recreate its original design. Guillaume de Jerphanion, an early twentieth-century explorer of the region, photographed the chapel in a more complete state, showing the dividing wall and its window, demonstrating that the tomb was originally visible from the adjoining chapel. A digital reconstruction is needed to measure what kind of view was offered by that window in order to more fully incorporate this space into our understanding of commemoration in Byzantine Cappadocia. Recent scholarship on multi-sensory worship, celebration of the liturgy, and active use of commemorative portraiture indicate new contexts in which to study the tomb and its donor portraits. I surmise that the painted ceiling is also a liminal space that visually connected the holy dead inside the tomb with living viewers in the adjoining chapel; the cross-shaped ceiling decoration was visible to both, serving as a metaphysical representation of the heavens in a rock-cut chapel beneath the earth.

In its most direct application, this model will serve as a tool to answer specific research questions for my dissertation: what exactly was visible from the chapel through the window (and was a particular vantage point emphasized)? How were viewers in the chapel able to see and interact with the ceiling decoration in the tomb? But the digital output also has potential to be a generative work in itself. Through a broader interpretation of the project, this 3D model will serve as a case study for larger issues through open access availability of the model and an accompanying white paper or article —specifically, it will address the challenges in modeling spaces that have been altered or destroyed—about using widely-available tools with photographs, digital illustrations, and historical drawings.

The heuristic process of model-making can utilize a vast array of tools and methods—from quick experiments with smartphone apps to collaborative projects that adhere to the London Charter.[2] Increased access to tools means that architectural historians are engaging more with augmented reality, making their critical engagement with those tools imperative. Yet many discussions of the modeling process are geared toward readers with scientific or archaeological training. Digital Humanities scholars have begun to address modeling as a kind of design process—one that is not simply replication, but interpretation.[3] My article will add to this discussion by documenting how far humanities researchers can go toward answering architectural research questions with out-of-the-box solutions.

The dissemination of white papers can simplify training and tutorials, streamline budgeting and resource management. Documenting my digital process also brings to the surface the “hidden” digital work that is part of the research process for a traditional, written dissertation chapter. My white paper or article will highlight the decision making process and the intellectual underpinnings that drive decisions about tools, methods, and their reflection of the visual and historical evidence being used. [4] Because the model itself will “live” on an open access website, it can serve as a pedagogical tool and springboard for conversations about modeling, including issues of accuracy and ethics in producing public scholarship that uses data that is uncertain or hypothetical.

This project will expand the canon of Byzantine architecture with an open access model of a seldom-visited Byzantine monument. Archaeologist Giorgio Verdiani has recently demonstrated that 3D renderings are a good way for the public to experience Cappadocian monuments that are no longer accessible.[5] Here, I expand that argument toward reconstructing spaces that are accessible but heavily damaged. Small-scale projects like this have the power to diversify the art historical canon, which is often based on objects for which images and access are widely available. Open access research on heritage sites leads to expanded awareness of preservation and to greater diversity in the art historical canon. By providing funds for software, training, and digital labor, this award would enable me to expand and make wider use of a digital component of my dissertation research as a contribution to public scholarship, arguing for a more diverse art historical canon.

Project scope or requirements: This project combines photogrammetry (modeling that “stitches” together digital photographs) and polygon mesh (illustration-based) modeling for a more comprehensive representation of this chapel than has been built before. The research phase of the project is nearly complete, but the digital model is in very early stages of development.

Work Already Accomplished: After site visits to Cappadocia in 2011 and 2013, I have a collection of digital photographs, sketches, and first-hand descriptions of the existing space. I used these documents with research on secondary sources to write a conference paper that was presented at the 2013 Byzantine Studies Conference. I was able to develop reasonable hypotheses for the conference paper, but I need more concrete visual evidence in order to make a convincing argument in my dissertation chapter about the viewer’s experience in the chapel.

I created an initial model of the space using a trial version of Agisoft Photoscan (photogrammetry method). This method will allow me to create a more accurate floor plan of the chapel and tomb than the one sketched by Jerphanion in the early twentieth century (which is still used by scholars today). However I cannot complete my model using this method because the destroyed wall leaves the space incomplete; there is not sufficient historical photography of both sides of the wall to incorporate historical images into the photogrammetry model.

Remaining Work To Be Done: A polygon mesh model (using tools such as SketchUp or Rhino 3D) will essentially be a digital illustration that traces photographs (both mine and Jerphanion’s) to visually reconstruct the wall between the chapel and tomb. The previous, rough photogrammetry model can serve as background to provide measurements and scale for the illustration. My digital process includes further instruction and tutorials on these tools and further reading on the decision making process. This is an area wherein support from NYCDH centers will be helpful. The final model will precisely demonstrate the point-of-view of Byzantine worshippers from several vantage points in the chapel, providing insight on the relationship of the chapel and tomb during commemorations of the holy dead.

My timetable is to complete the model by April 2016, and the white paper or article about technology and the decision-making process in late spring/early summer.

Budget (in hours and/or cost):

[1] For a successful example of digital models that allow for spatial analysis of Roman architecture, see J. J. Dobbins and Ethan Gruber, “Modeling Hypotheses in Pompeian Archaeology: The House of the Faun,” in Proceedings of the 38th Conference on Computer Applications and Quantitative Methods in Archaeology (CAA 2010: Fusion of Cultures, Granada, Spain, 2010), 1–9, https://www.academia.edu/1329259/Modeling_Hypotheses_in_Pompeian_Archaeology_The_House_of_the_Faun.

[2] The London Charter: for the computer-based visualisation of cultural heritage, (2.1, February 2009), www.londoncharter.org

[4] The popularity of Miriam Posner’s writing on this topic attests to the need for more of this genre of writing. Miriam Posner, “How Did They Make That?” Miriam Posner’s Blog, August 29, 2013, http://miriamposner.com/blog/how-did-they-make-that/